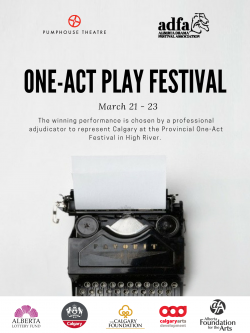 The Pumphouse Theatre and Alberta Drama Festival Association are at it again for the 36th annual Calgary Region One-Act Play Festival.

Over three evenings, from March 21-23, we are thrilled to be presenting nine one-act plays from a diverse array of local artists. From drama to comedy, new work to classics, the One Act Play Festival offers something for everyone. Each evening will be accompanied with a public adjudication by this year’s festival adjudicator, and a post-show reception. The Calgary Region One-Act Play Festival is an exciting way to see some of Calgary’s most passionate up and coming theatre artists. Come take in a night of great entertainment while supporting local performing arts!