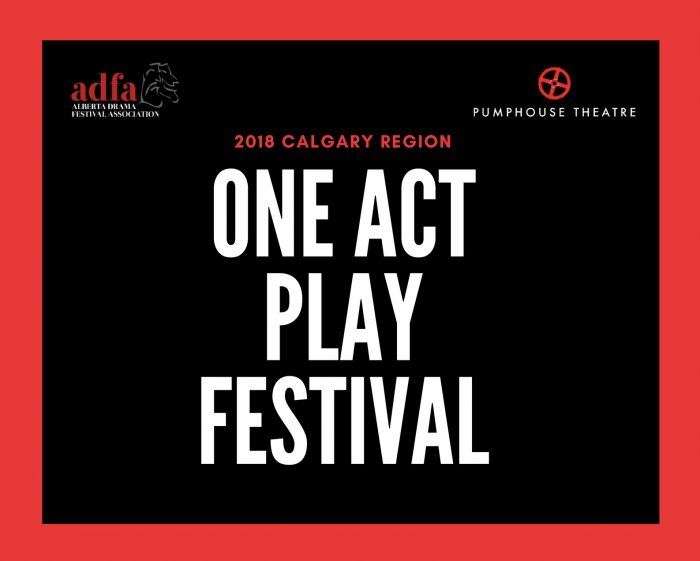 The Pumphouse Theatre has presented the Calgary Region One-Act Play Festival with the Alberta Drama Festival Association for over 30 years and we are excited to do so again! The Festival will be held March 22nd – 24th, 2018 in the Victor Mitchell Theatre. Each night will be a collection of 2-3 one-act plays, varying in genre and style.

One play will be chosen by a professional adjudicator to represent Calgary at the Provincial One-Act Festival, which this year will be held in Fort McMurray. Each of those chosen plays receives travelling expenses or a grant to assist in funding their participation in the Provincial Festival by the Alberta Drama Festival Association. This year our adjudicator is Shari Wattling!

by Sienna Holden
presented by Theatre SHHH!
“Does one moment determine the course of a life?”

GROUP BIO:Theatre SHHH! was created to produce Sienna Holdens final project, “Songs for a New World” during her final year of acting school at Rosebud School of the Arts.

by Geoff Bamber
presented by A.W.A Productions
“When Joanna checks into a hotel after an awful day traveling, she just wants to rest, so she is not at all pleased when Lennox walks in. However, that is nothing to her reaction at the appearance of his guest…”

GROUP BIO:
A.W.A Productions have come together to perform for this festival. Featuring the acting talents of Lisette Allan and Kurt Archer, directed by Randolph West, and lit by Trevor Somers. All participants have been involved with the Calgary theatre community for several years.

“Yugen (Japanese) — An awareness of the universe that triggers emotional responses too deep and powerful for words.”

GROUP BIO:
Reckless Daughter Creative is a Calgary based collaborative group, originally created by Madeleine Taylor-Gregg and Ashley Humphries, to represent the emerging female artists and their stories.

by Archie Wilson
presented by Gang of Three
“A menacing Russian-led invasion into the home of a mild-mannered man with a taste for single malt whiskey.”

GROUP BIO:
The Gang of Three is an ad hoc performance troupe based in Calgary. Two of the actors are teachers, the third actor is from Belarus, and the director is insane.

by T J Jablonski
presented by play between your thighs Productions
“Like gender, love is not always what it seems; a story of transformation.”
GROUP BIO:
An adventurous coupling of bold new LGBTQ+ groups and the newest theatrical production company

by Michael Dean Dargie and Jennifer Maclean
presented by Dropbear & Panda
“How do you connect with someone you’re meant to be with if you are destined to never be together?”

GROUP BIO:
Dropbear (Michael) & Panda (Jennifer) tend to “do what they want” because they believe life should be full of art and adventure. Over the past two years, Dropbear & Panda have been producing and creating short films, music videos, corporate videos and CDs. Buoyed by occasionally misplaced confidence and an insatiable urge to create, they thought, “how hard could writing, directing, and performing our own original play be?” Jennifer is a serious actor in community theatre around Calgary and Michael is a regular on stage at Loose Moose Theatre doing decidedly un-serious improv. Together they form Dropbear & Panda.

Saturday, March 24
in the Victor Mitchell Theatre following the final

Sponsored by The Pumphouse Theatre

A huge thanks to our Sponsors!